Here’s your chance to start 2021 on a positive note as Bloodworks Northwest is coming to the South Whidbey Community Center in early January for a blood donation “popup.”

Like everything else, COVID-19 has disrupted the usual routine for donating blood and these popup sites are the new way Bloodworks Northwest – which supplied about 95% of the region’s blood – is collecting donations.

This will be the third such drive at the Community Center in recent months and Efrian Frias, Whidbey Island Donor Resources Representative at Bloodworks Northwest, says the previous drives have, “been really good,” adding that South Whidbey is, “such a giving community… it’s been an amazing turnout.”

Those past drives have resulted in 200 donors stepping forward, and Frias says that since there are multiple uses for each donation, “That’s 531 lives that have been impacted.” 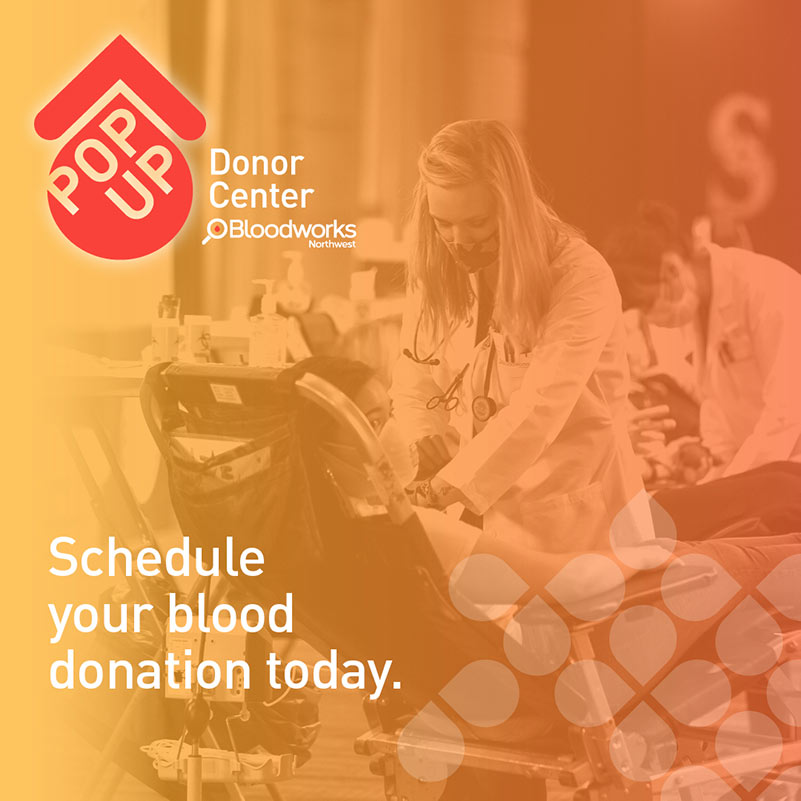 Hanna McNutt, Snohomish County Donor Resources Representative for Bloodworks Northwest, says that she’s seeing people donate blood because they want to do something positive for their communities, and donating blood, “is one of those easy ways (to help).”

The pandemic has forced changes in how blood is both collected and publicized.  Frias notes that they used to go to churches, schools, and other groups to get support for upcoming drives, “All that’s out the window,” due to the pandemic.

COVID-19 has also forced them to stop using their mobile unit, which had been responsible for 60% of the blood collected by Bloodworks Northwest.  Collection sites such as schools and churches were also not available.

They pivoted to places like the Community Center gymnasium because they need at least 1200 square feet to collect blood and properly socially distance all the participants.

Safety concerns have also forced a few other changes, says Frias, including a requirement that people make an appointment as they cannot accept walk-ins at this time.

To speed the process, they ask that those making an appointment fill out an online form the day before their appointment.  Donors will get a QR code they can bring to the Center which will speed up the donation process.

Everything will be at least 6 feet apart and post-donation food and refreshments are individually wrapped.

If your schedule doesn’t fit any of the three days in January, Frias says there will be other opportunities.  He says they hope to hold a popup on South Whidbey, “every eight weeks through June.”