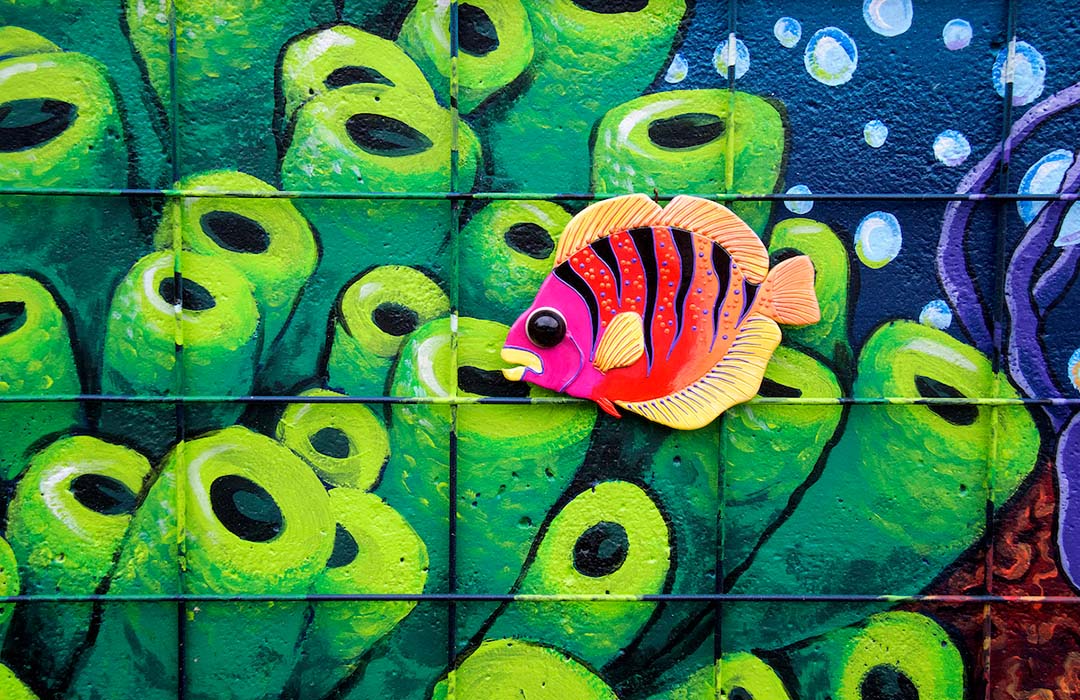 Note:  This story first appeared in "This is Whidbey" and is reproduced with permission.  You can read the original story on that website here...

Among Langley’s most creative approaches to down time during the pandemic is the transformed vibrant wall of the former middle school wood shop.

“”We thought it would be fun to brighten up the wall, which like many at the old school, was peeling paint and sort of a Soviet-era brown,” said Joe Whisenand, who, with his wife Mary Lou Whisenand, run the Learning Lab at Langley under the umbrella of the Living Design Foundation. Non-profit staff, guests and volunteers taught skills in woodcraft, gardening and cooking until the pandemic shut the classes down. The couple plans to re-open to the public in January 2022, subject to state Covid regulations. 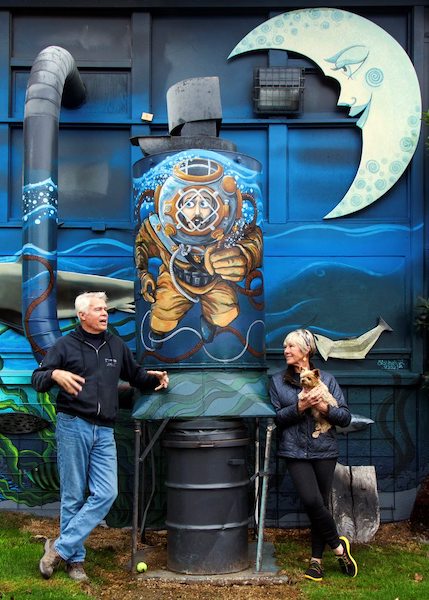 Meanwhile, with the help of volunteers, the shop and kitchen re-opened for middle school students this autumn, who are augmenting their industrial arts skills in cooking and wood shop.The couple imagined refreshing the look of the campus’ old buildings and neglected grounds would improve visitors’ experience.

“The parking lot gets full of parents parking for the children’s and dance theaters,” Joe added. “In lieu of giving public classes, we began making improvements to the area. We built picnic tables, installed planters, added (whimsical wooden) flowers to the garden shed. We pruned the old elm tree and shrubs, and took out trailers full of limbs and bushes. We thought the wall was a good place to add art.”

The community center, facilitated by Gail LaVassar, executive director of Readiness to Learn, is a re-imagined use of the Langley Middle School, sections of which are nearly a hundred years’ old. The center hosts non-profits and businesses which promote education and well-being, including the Whidbey Children’s Theatre, and Whidbey Island Dance Theatre.

Taking a look at the blank canvas of the shop building, Joe brainstormed with endearing veteran wood crafter Don Bundy, who taught carving classes to adults and students at the Learning Lab’s wood shop. 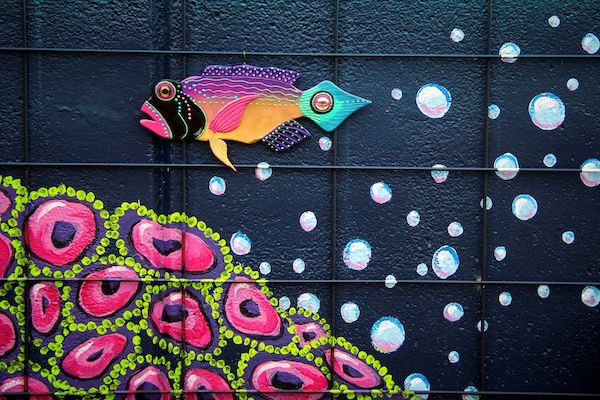 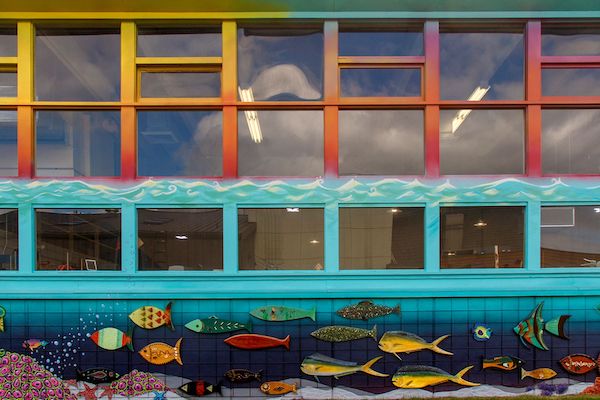 The friends imagined painting the wall beneath a bank of windows and decorating it with fanciful fish.

Precutting wooden blank fish forms, the men invited family and friends to decorate them. Joe then sealed them with weatherproof resin and fixed them to hog wire fencing along the wall.

What happened next was a convergence of talent that took a flaking, boring, beige facade at the South Whidbey Community Center to a vibrant gallery wall of color featuring more than six dozen whimsical fish.The Learning Lab wall now brings a sense of joie de vivres to visitors.

“We approached this project knowing Langley has a lot of talent,” Joe added. “As the fish started going up, people noticed. Soon word got around. Artists like Kéké Cribbs, Ron Adams, and his wife Nancy Loorem Adams added fish. Nancy took one of the blanks, an angelfish, to Siobhan Wright.” 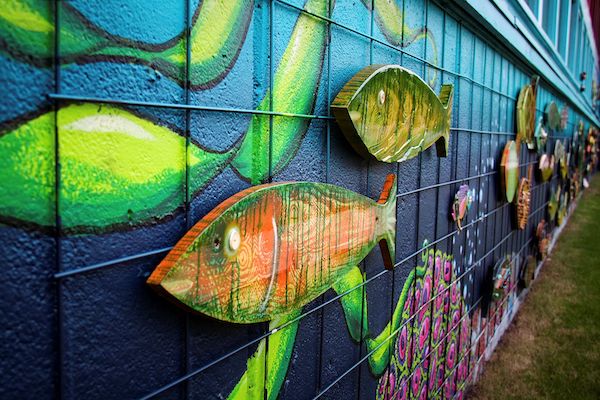 With the arrival of Siobhan’s art, the wall took on a new perspective.

“Siobhan shows up and imagines a moon on one side and sun on other,” Joe added. “Stars to come. She had the vision, which exploded the limited idea to be the entire wall. Gradations of color were her direction. Siobhan gets the credit.”

Now the wall merges from a deep blue to lighter blue to yellow-pink and light blue along the overhang. Siobhan, who painted the popular butterfly wings photo op board nearby the former Dog House on First Street, let her imagination for the shop wall flow into a full-on mural with a smiling sun on one end of the building and a whimsical half moon on the other.

"[Nancy] gave me a blank fish"

They are joined by an octopus, sea anemones, a Great White shark, and a perplexed mustachioed man in an old-timey diver’s suit.

“[Nancy] gave me a blank fish,” Siobhan wrote in an email. “I painted it and Joe and Mary Lou liked the whimsical style. They asked if I would paint the background for the fish. It blew up from there. It gave me a nice art project to do for summer.”

Community development in partnership with their realtor/development business formed the foundation of Whisenands’ professional experience for 30 years when they lived in Greeley, Colorado.They founded the Living Design Foundation there, teaching real life skills to at-risk youth. 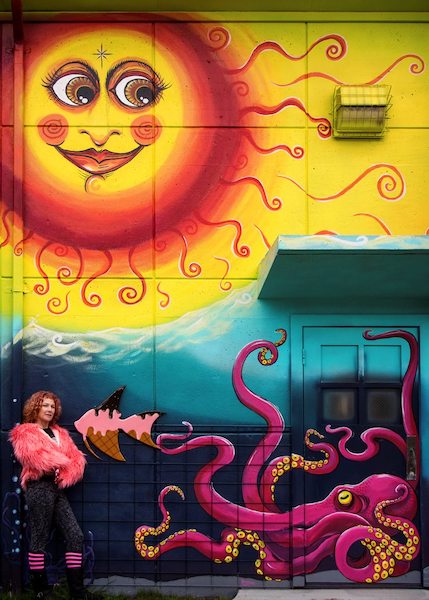 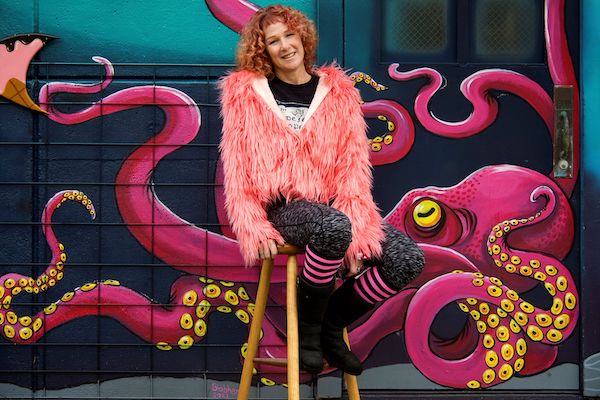 When it was too hot during Greeley summers, they traveled to the San Juan Islands and the Olympic Peninsula to cool off. Seattle friends suggested they visit Whidbey Island for a romantic get away at the Inn at Langley. They fell for the place. Fate would later lead the couple to move to our village by the sea.

“We were in land development, and read The Not So Big House,” Joe added. “We learned about Ross Chapin’s Third Place Cottages and thought this is a wonderful place.”

The couple bought a home in Langley and continued traveling back and forth for work in Colorado. They were in the midst of working with the Living Design Foundation in Colorado when they learned of the middle school’s conversion to a community center during the summer of 2018.

“We said this has everything we want to teach,” Joe said. “It was serendipitous. Once you have the facility and plant, it serves as a platform for anyone who wants to teach.The Learning Lab is a platform for the community to transfer knowledge from the older experienced people, to the younger ones. That’s the first part of it.  The other part is  ‘programming’ utilizing that platform, one of which is “Living by Design” for High School and Middle School students developed by Joe and Mary Lou.

“The Learning Lab also serves to help connect downtown Langley, the Community Center, and the fairgrounds. The idea of connecting those with a public through way invites people to visit all three and enjoy art while they do that. I think we’ve helped with that.” 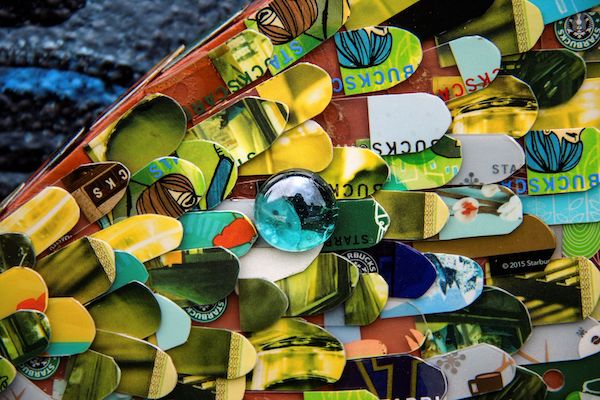 Now the wall is home to fish made by a spectrum of artists aged 8 to 88. The community is invited to create a fish to add to the school. Donations to the Living Design Foundation are appreciated. Joe envisions the art to be rotating; perhaps senior high school students could create fish for a future ‘gallery’ that would fund an end-of-year-trip.

“I think this place is ripe for ideas,” Joe said. “All will be welcome.” 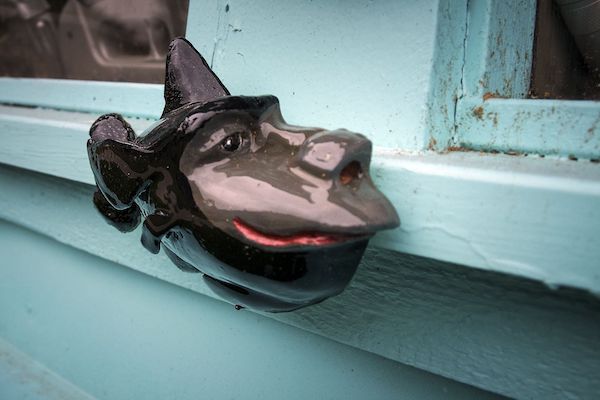